And is more true, *** the last spring of 2005 .. I'm after more using on swallow tail in Elbrus area, and having sown in a head certain grains... I have conceived at a leisure make a sharp nose to my old board "Option RedLine 166" - old "fighting hard freeride mashine")) . On which?? And here " on that ":

- All in her as though is good - moderately rigid board and is made soundly, therefore it(she) was late at me which year among others, only here because of rigidity of a nose (that in itself is usually excellent(different)) in rather soft fresh snow it does not suffice soft swimm though it and is moderately long - 166 cm (at my growth of 176 cm). The sharp nose would increase "lever" - from a forward point of a board up to forward binding, not increasing thus! Greater "lever" would force a forward part of a board to cave in in a soft snow and better to work. And on hard off-pist the nose does not influence in any way - all in fact on edgings.

Speaking about "swimm in the powder", i'm speak not about power up nose of a board from under a snow - with it "no problem" - as is known, such is easily made - namely soft swimm  in fresh powder - when a board becomes elastic swimm and nimble " on a snow, as a crest of a wave " - as surf..:)) " who knows - that will understand ". And who is not present - that is not present

(in the Summer.. Clear business, an idea on " an applied nose " it was forgot.
.... has taken place summer with his long evenings behind green tea. 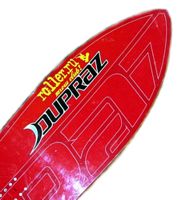 And here... The Autumn draft me has casually tightened(delayed) in a certain place where IT has suddenly got on eyes. Dupraz D1 (it is read as [Dupr'a] - on behalf of Serge Dupraz->> Serg Dupraz - one of founders " Hot Snowboards ":)

The same length the Ёц-tail it absolutely an another matter - and other theme...

Has first of all run home - has measured on Option notorious "levers" - distances from points of " an output of an edging " up to bindings. Has departed back - has compared with "Dupraz" - almost coincides... Again an idea - it is similar on ". There Is nothing - it is necessary to take!:))) other way to check up - is not present. Here so it is unexpected at me this red board was got(started). 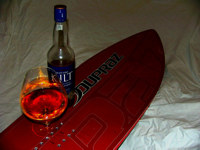 I have taken it(her) for a nose.. And just in couple of days has dragged in Syberia:)) a Place known for the easiest mega-down powder in fir forests:))) Fields there are not present, is very few rigid lines and a lot of wood, therefore swallow (Dinastar 4807) I to take did not become - as a whole it there non.

In the first day on investigation of district has jumped out on checked up Option, and in the second - change bindings on Dupraz. It was fastened and at once in a wood - fresh powder to strike!

The first idea - yes... It is long! And it not a swallow-tail! Despite of relative similarity - At all a swallow-tail. But I in a wood, here again it am good... Places very dense wood between spreading fur-trees with a underbrush:))) the Ёц-tail should be twisted, and this turns:)

Without special weght heels the board softly floats above a snow, floats confidently, not burying , all time showing an edge of a nose from under a snow. Softly floats - unlike freeride machine Option - it simply rigidly tears powder somewhere in his depth, at all not showing the nose from under snows:))))

And on the other hand - it is very unusual - for the speed in an elastic snow, in a virgin soil under a forward leg(foot) it is felt unusual "vector" - it is possible to go for a drive somehow low, forward leg in down directing a board. Surf the sensation, is direct as at swallow - i.e. if for example to want, sharply to peck a nose will not leave - the long nose "lever" curves a board and bears it from thickness powder, and it is family character  swallow-tails.

Then from interest has rearranged binding - has shifted back in edge. And wunder - on-sensation it it was almost imperceptible! I think - that this board - geometrical concept, and in it her so strongly works its thought over geometry + rigidity on length is picked up, that on this background shift bindings and appears is not swept especially up (not especially appreciable). I hope - the above-stated clearly:))))

Snow still all right, for me to much more surprising became that, as on a rigid line game with bindings (it is more from interest, than from need) too was not especially appreciable. Likely that bindings and so are strongly enough displaced back, therefore small shift + _ especially does not influence. Though, there is still such nuance as a head, and it too quickly makes the amendment to technics on rigidity of a slope and weght balance boards:))

In a week woods with powder places have already unrolled all, and I have decided " to play in the skier " - to take for a drive on hard off-pist on "forehead" - a forward line on a Green (about such hard off-pist happen usually on a line under the top armchair on Tcheget), there and a bias similar - 30-38 % on GPS. Not too greater hard were also not so rigid. Besides and for technics it is useful, all the same this beginning of a season:))) Wished to have a look, as the board will behave... Wished to have a look only, yes at couple of days on these hard and standing with cool! )))) likely I somewhere inside the skier: ((((only if , I about it nobody spoke!)

Certainly, on usual narrow and rigid freeride board to a board on these(it) bouls¬з would be more comfortable, " without a market " - snow geometry Dupraz here did not work, and which that was only in a minus - the same width nose and missing torsion... But me was not so in not good that, unequivocally to tell something of type - " this board - only for the Big Snow. " And run to run change bindigs back on rigid Option.

But it besides, with the amendment - for me, my habit to rather long boards, not which technics and weight (~82 kg total).

On results of wheelchairs I can tell that:::

Certainly it is universal freeride board, nonrigid. Actually it " the geometrical equivalent-basis ", apparently on a photo, and on sensations - a board of a comment of 164-166 sm with about-very progressive lateral radius + is added a sharp nose:)) the Nose formally became more longly - and a board swimm (it is formal - because " the length of an edging " from an increase of a nose has not increased:))

The geometry of a board, certainly, is grinded under a good snow - the big wide burdock in front and relative a narrow tail (pin tail) in a good snow instantly give it . Most sugar - in a fresh chubby snow where begin swimm lacks of usual "universal" plates.

From manners swallow in it anything is not present a tail, in general. Dupraz D-1 - at all a tail.. And it is the extremely erroneous to rank it to swallow only on one her defiantly to a sharp nose:))) With tails absolutely other games, another cool and by and large, does not replace One another. Swallow is much less universal.. But in absolutely new snow on a simple relief and in fields, certainly, cooll. Especially it on frankly flat fields (for example in Georgia- gudaury plases) where on simple boards everyone stop and up to the first trace in fields nobody goes. 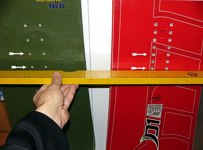 We have - " Dupraz D1 " - length of 177 sm, and I think at her of 2-3 radiuses of meters up to 9. The board for the width has quite good torsion flexibl - therefore of what I was afraid - desperate off-pist on rigid and as it happens at swallow - at her is not present. Though.. In spring, fleeced by places up to an ice after avalanches in Cheget (Grande place) it was definitely uncomfortable. However, in such places of mood others - to be I would live - to carry away legs:))

Having put both boards at a floor - we look a level of bindings statement on boards - and it is identical!!! Means are predicted weght balance, etc.

Basically it behaves the same as a good board of 162-166 sm rigidity above an average (on a deflection approximately as Burton-air), more truly, as wide a board - its width in area bindings - 27,5 cm above and 26,5 cm below:))

From pleasant pluss - thick edgings:))) From minuses - the top glossy surface of a board very quickly brocken - a softish up red laminate. And I would like for more rigid tail.. Though it, certainly, from a habit. For pair descents the technics is undermined under a shell.

I with pleasure would carry this board to a class "super-directional freeride":)))

By the way, now strongly I am surprised - why now anybody any more does not do(make) a similar strongly pronounced configuration.. ( type RS-Judge, "HMR-Twilight", Fanatic is another and it is not counted). ... Though, having rummaged in history of snowboarding we find out, that at the beginning of snowboarding a board of such configuration was usual business... (as the wide ski) Is a pity, that probably "during" averaging forms and parameters today all boards became so identical, that blindly one from another can be distinguished only to taste....:))))

After that tests, and are more true, pleasure from them, have proceeded in the Himalayas, Georgia, Again in Siberia, Elbrus, Iran - and everywhere it was "wery cool¬г "!!!!
That else. It is good, that this board has got to me only in some years of wheelchairs. Earlier I precisely would not understand it.

Now from we shall compare Dupraz with swallow tail. - " swallow tail " the same length:: Dinastar 4807... By the way - the eye visible, that Dinastar_snowship it is sensitive more longly. Like all the Frenchmen, and it is visible measure on a miscellaneous :)))) it is visible that an edging at Dinastar - strongly lenght -i.e. if to continue Dinastar round, a tail - there will be a board likely in 200 sm, but it is compensated to those that bindings on Dinastar stand strongly below, than at Dupraz...

The maximal width of a nose at Dupraz is sensitive more widely, than at a boat 4807 - from it and that is felt "weght" under a forward foot. 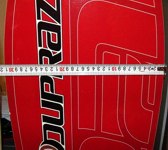 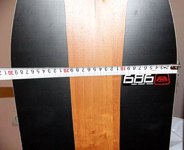 Look - are how much more strongly displaced back bindings on a swallow-tail of the same length, together with a soft nose and the rigid cut tail it and gives super-swimm in the snow to all tails ::: 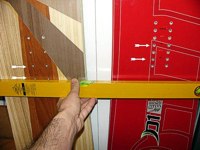 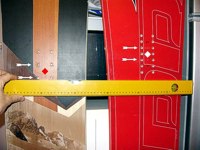 Width of a board in area of fastenings. 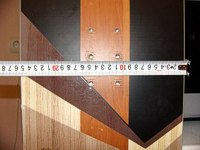 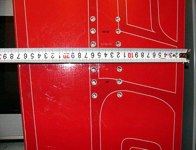 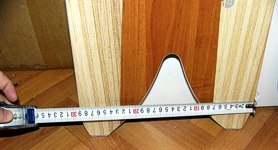 Corner of a nose-approximately same . 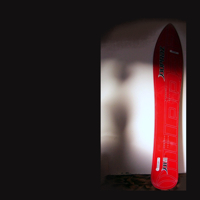 Adventures of a red board in the Himalayas:>>>>